And different approaches to it

Although I very much like the third noun usage, today we are going to be discussing proof in the context of mathematics and in particular, the various forms in which it can be achieved.

I like to think of mathematics as a structure and a tall and impressive one at that, which only ever gets taller over time. Each level of the structure builds on the layers below and at the very bottom is a foundation upon which everything depends. These foundations are known as axioms things which are assumed to be true and require no proof of themselves. Above the axioms are theorems, statements which are shown to be true based on the logical application of the axioms and theorems that lie below them. The truth of each level of the structure depends on the truth of the layers below. In any lower level theorem is proven to be false then the truth of all the theorems above is thrown into doubt.

The process of building the edifice depends wholy on the nature of mathematical proof.

Formally, in mathematics, a proof is an inferential argument for a mathematical statement. In the argument, other previously established statements, such as theorems, can be used. In principle, a proof can be traced back to self-evident or assumed statements, known as axioms, along with accepted rules of inference. Axioms may be treated as conditions that must be met before the statement applies. Proofs are examples of exhaustive deductive reasoning or inductive reasoning and are distinguished from empirical arguments or non-exhaustive inductive reasoning (or “reasonable expectation”). A proof must demonstrate that a statement is always true (occasionally by listing all possible cases and showing that it holds in each), rather than enumerate many confirmatory cases. An unproved proposition that is believed to be true is known as a conjecture. Proofs employ logic but inevitably include some amount of natural language which can admit some ambiguity. In fact, the vast majority of proofs in written mathematics can be considered as applications of rigorous informal logic.

Informally, proofs are things that are required in order to pass examinations in mathematics but which many students consider not that important in the grand scheme of things and sometimes even a load of dingo’s kidneys.

The presentation of a mathematical proof generally follows a format. The proposition to be proved is first stated along with any related assumptions about the elements involved in the proposition. What follows is a logical progression of statements, the truth of each of which is inferred from the statements that came before it coupled with other things (definitions, axioms and theorems) that we already know to be true. This progression of true statements proceeds until the original proposition is stated, at which point the proof is complete. Finally, and traditionally, the term QED appears which is an acronym for the Latin phrase quod erat demonstrandum meaning “what was to be demonstrated” or “what was to be shown”. An alternative, although slightly inaccurate, translation is “thus it has been demonstrated”.

Mathematical proofs fall into various categories. Each of these can be considered an approach to a proof, or a tool that can be employed in pursuit of a proof. Many theorems can be prooved in different ways using different techniques. For example, the classic theorm of Pythagoras is said to have at least 370 known distinct proofs.

A proof by deduction is a technique in which the succession of true statements is achieved via deductive reasoning. We proceed from statement A to statement B via an implication inferred from the assumed truth of A conjoined with other known truths (definitions, axioms and theorems).

The direction of the implication of truth between two statements must be carefully considered. For two related statements A and B we can have.

A only if B

A if and only if B

G. H. Hardy described proof by contradiction as “One of a mathematician’s finest weapons”, saying “It is a far finer gambit than any chess gambit: a chess player may offer the sacrifice of a pawn or even a piece, but a mathematician offers the game.”

Other styles of proof exist, such as proof by construction and proof by exhaustion but the main tools in a mathematician’s toolbox are those outlined above. Another style, although not formal, is the visual proof or proof without words. A great example of this would be the following visual representation of Pythagoras’ Theorem. 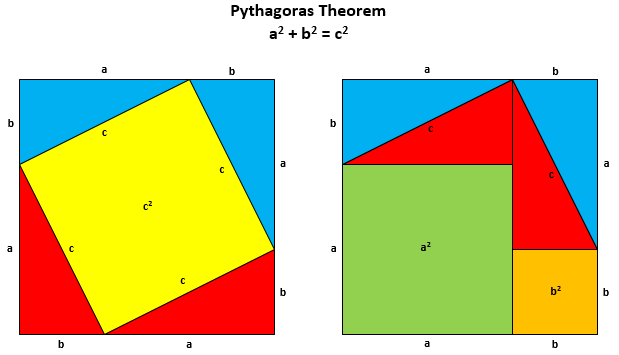 Let’s consider some interesting mathematical propositions and then use the different types of proof to turn those propositions into theorems.

I’m not sure if this one counts as a theorem but it’s a fun mathematical trick that we can demonstrate to be true via deductive reasoning based on the initial conditions.

We know that cannot be zero because .

We know from our initial assumptions that and so is a positive multiple of and further, .

For each of these possible values of , the middle digit is and the first and last digits sum to give . If we write the digits of M as , & then …

But we know that and therefore .

A Formula for the Sum of the First N Positive Integers

for all positive integers .

Assume that the proposition is true for . So we can take this as true …

Add to both sides to give …

We can rearange the right hand side to give …

which is the same as the original proposition but with .

So the proposition being true for logically implies it is also true for .

It is trivially true for since is true.

Therefore it must also be true for .

Therefore it is true for all positive integers.

The Infinitude of the Primes

Definition: A prime number is a positive integer that is only evenly divisible by itself and one.

There are infinitely many prime numbers.

Let’s take any finite set of prime numbers and then let’s form the number .

must have a prime factor but that factor can’t be any of because, by construction, there will always be a remainder of when is divided by any of the primes in our set.

Therefore there must be another prime that is not in our set.

Therefore there are infinitely many prime numbers.

The Irrationality of the Square Root of Two

The square root of two is an irrational number.

Thus can be expressed as where and are integers with no common factors (other than ) and where is non-zero.

Thus must be an even number since it is an integer multiple of .

Substituting this back into gives and thus which means that is even as well (since it’s a multiple of ) and so, by the same argument as above, must be even too.

So, and are both even.